How CoolSculpting Got Rid of Unwanted Fat – For Good! Slim Studio

Like so many women and men who want to improve their physique, I too have problem areas that despite eating clean, working out, and living a healthy lifestyle, don’t seem to ever go away. No matter what I have done, I’ve been unsuccessful in getting rid of the fat under my chin (plus my hips and bra line). I hated my double chin and knew that the fat-freezing treatment CoolSculpting was my last resort since plastic surgery wasn’t in my plan. Plus, the CoolSculpting before-and-after images I saw blew me away.

I saw CoolSculpting everywhere—on social media, in the pages of my favorite magazines, and even on billboards from coast to coast—so I started to dig deeper into the noninvasive fat fighter to see if it would provide improvement to the areas that bothered me. Armed with a plethora of articles and research on CoolSculpting and how it works (more on that in a minute, but it uses cold to freeze fat), I booked an appointment to FINALLY get rid of my pesky double chin.

CoolSculpting, which is the most popular treatment for non-invasively eliminating unwanted fat, received FDA approval in 2010 to treat the abdomen. Since then, additional indications have been granted, and now safely and effectively also targets visible fat on the flanks, thighs, under the chin and jawline, upper arms, back, banana roll (the area directly below the buttocks crease), and bra line.

While it may sound like weird science, the technology behind CoolSculpting was invented by two Harvard physicians who noticed a correlation between children eating cold popsicles and a reduction of fat in their cheeks. Intrigued, the developers of Cool Sculpting took a deep dive into the connection between fat and cold and, during their research, determined the just-right temperature to kill fat cells without causing damage to the surrounding tissue or organs. 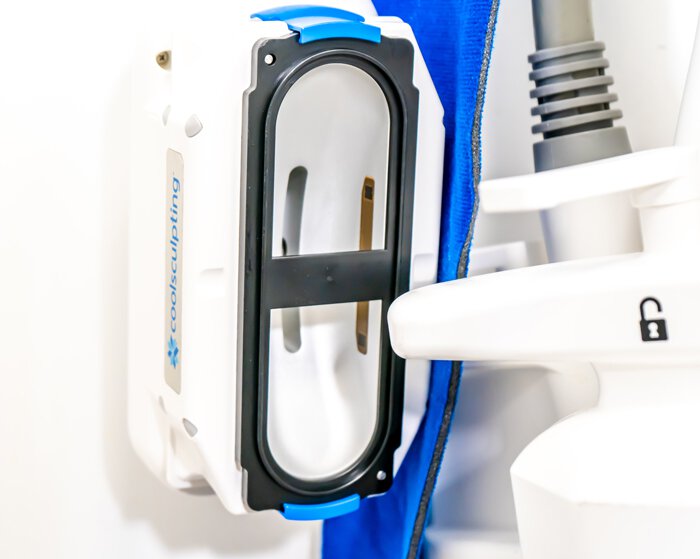 The treatment begins with the technician marking the area on your body that is going to be sculpted. Then a gel pad is placed over the area to protect the skin from the cold. CoolSculpting uses applicators, or “paddles,” to deliver the treatment. There are different sizes of applicators for different areas of the body, and different sizes of people. The Cool Sculpting applicator is placed on the body and uses high vacuum to bring the targeted tissue into the applicator. You’ll feel a bit of a pulling sensation from the vacuum. Then the cold is delivered, which is not really uncomfortable, but does feel unusual. Then the area goes from cold to numb and there’s virtually no sensation or feeling. Once the numbness fully set in, I was relaxed and comfortable enough to take a work call and catch up on an episode of a show on Netflix. At the end of the treatment, the applicators were removed, and the area under my chin was massaged for a few minutes to help break up the fat cells, using gentle pressure. All in all, it was actually quite relaxing!

What to Expect Post-Treatment

I felt good after my CoolSculpting treatment and actually went right back to work. That night, the area was swollen, red and tender, all of which is normal. But I wasn’t in pain. The numbness didn’t subside until about two weeks after my Cool Sculpting treatment. Some patients also experience a deep itchy feeling, but I didn’t. I was also instructed to drink plenty of water, eat as clean as possible for the next few weeks and massage the area under my chin often, which helps move along the destroyed fat cells.

I was able to work out, and life, as I know it, never stopped. For me, one of the reasons why I choose CoolSculpting over other options is because it doesn’t require any downtime and that I only needed two treatments to see the results, which is important for a working mom like me.

As my consultant explained to me at my complimentary consultation, the results are not immediate. In fact, it takes upwards of four weeks to see the initial results; full results take 8 to 12 weeks. This is because the fat cell death cycle, also known as cryo lipolysis, takes time because the fat cells first freeze, form crystals, and later die. Then the body starts a natural inflammatory process that pushes the dead cells through the lymphatic system. As the fat cells are ushered through the body, the fat decreases, and results can be seen.

After about two months, I was able to see the final results of my CoolSculpting treatments. The area under my chin is more slender, and my double chin is pretty much gone—and never coming back! I also see more definition in my lower face, which I love. I was so impressed with the results that I had my love handles and bra line treated too. Now, all my problem areas are smooth and lump-free, and I finally have the sculpted body I always dreamed of!

Call us today  (404) 410-7777 or schedule a consultation online to learn more about Coolsculpting at Slim Studio Atlanta.